The Mind: Friend or Foe?

The morning sun stabbed my eyelids, waking me with a pounding headache. It felt like woodpeckers were perched on my ears tapping my temples uncontrollably. And my mouth tasted like one died in it. Pulling the covers over my head before forcing my eyes open, I smelled the regret of last night’s party. Suddenly I felt a rush swell to the top of my throat. The haze of dust quickly cleared as I hurried to find a toilet. “I did it again,” I thought.

This was college routine. Not the drinking as much as the recklessness. There were few limitations in my world. Little restricted my behavior, even knowing the outcome. I wasn’t alone in my pursuits but felt isolated nonetheless. Inner demons plagued my mind and my body reacted. Feelings of insufficiency, unworthiness and guilt swallowed me in a pool of consuming self-pity. I discreetly carried these evils with me, like the hidden inside pocket of an overcoat.

The underdeveloped adolescent brain is like a set of loose wires that haven’t been fully plugged in. 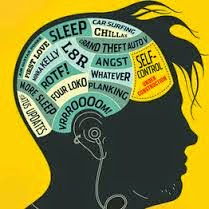 Perhaps if I knew my impulsivity was a natural consequence of my age, that my decision-making skills were still in their infancy, that there were legit reasons for my unpredictable emotional time bombs, risky behavior and rebellious nature, then maybe I would have given myself some well-deserved slack. Or maybe not - but at least I would have had a choice.

Our minds are our most valuable and precious resource through which we experience every single moment. We depend on it to be focused, creative and spontaneous. Rely upon it to be happy, content and emotionally stable. We call upon it to be kind, thoughtful and considerate. The same mind that makes us human – the thing that distinguishes us from Siri – our iPhone pal.  And yet we barely take the time to look after it.

We’re taught early on how to care for our physical bodies. From the beginning we learn the importance of teeth brushing and personal hygiene. We visit the doctor routinely and we understand the benefits of exercise and nutrition, although not always practiced, it’s at least made conscious. Our education system has made physical education mandatory. But still our mental health is scarcely discussed. It’s given little priority, like the quiet, uninteresting kid in the classroom corner who seems almost invisible, until one day he isn’t.

Daniel Goleman says the best predictor for success is not IQ but rather grit and cognitive control.  A thirty-year longitudinal study of more than a thousand kids – the gold standard for uncovering relationships between behavioral variables – found that those children with the best cognitive control had the greatest financial success in their 30s. Cognitive control predicted success better than a child’s IQ, and better than the wealth of the family they grew up in.

Armed with this knowledge and staggering statistics we still believe our minds can tend themselves - if we’re not diagnosed with a mental disorder, then why intervene? Despite the celebrated brilliance of our minds they’re not always the trustworthy friends we’d like to believe. They can turn on us without warning. One minute they’re supportive, creative, and compassionate; the next they’re mean, vicious, and unforgiving.  They can be downright brutal. Our minds are problem finders; they focus on faults and what’s lacking and they easily take over our attention so that all our senses are dulled (barely noticing the soaring bird or nature’s perfectly tuned orchestra, the smell of a blossoming spring, or the flavors of a fresh picked berry). Left untamed, this brilliant mind of ours can be our greatest source of pain and suffering - a costly evolutionary glitch.

A Harvard study found that on average our minds are lost in thought almost 47% of the time.  This constant mind wandering is also a direct cause of unhappiness.  To spend almost half of our lives lost in thought and potentially quite unhappy seems tragic, especially if there’s something we can do about it.

As an adolescent I knew the consequences of heavy drinking, drug abuse, careless sex, late nights and little sleep.  What I didn’t understand was my motivation behind them.  Not only was my brain underdeveloped and still making connections but it was also chatting away without my recognition. I was never formally introduced to the unrelenting voice in my head – the constant stream of thinking. Like most people, I just assumed the thoughts were me.  My identity. If the voice said I was ugly, fat, stupid, insignificant, unworthy, then of course, it must be true. If it gave me something to fear, then there must be reason to be afraid. It was impossible to distinguish thought from reality, to see a thought as something real, but not necessarily true. And because the mind and body are so intrinsically connected, a simple thought created a cascade of events within the body, giving reason to pay closer attention to the body to better understand the mind, and vice versa.

What if we not only introduce ourselves to the unrelenting inner chatter but also choose the relationship we have with it? Friendships take effort. They need to be nurtured, cultivated and they need attention. Our greatest friend, if ignored, battered, betrayed or neglected can, in fact, become our greatest enemy.

There are piles and piles of research on how mindfulness training actually changes the wiring of the brain - making it more attentive, focused, emotionally regulated and essentially - happier.

So yes, as Marcel Proust so eloquently puts it: “The real voyage of discovery consists not in seeking new landscapes but in having new eyes.”

If you’re interested in shining the light of awareness on our next generation –introducing them to their inner world, empowering them to reclaim their brilliance, promoting cognitive control and emotional regulation, and helping them noticing destructive thought patterns and reactive impulses – then contact me at  www.innerlightofmine.com and bring mindfulness (or yoga)  to your school or community.
Posted by Valerie Vendrame at 8:46 AM